Go Kart Clutches: Which Kind Should I Use?

Clutches
The purpose of a clutch is to disengage and engage the engine from the load it is pulling. The necessity of disengaging the clutch is equally important for safety as it is for performance. Gas engines in particular all the time and need to be disengaged when the gokart is being stopped or slowed down.

Engaging the load has more going on than just pushing the gas, or pulling a lever. Typically, gas engines do not have instantaneous torque, like an electric motor. The engines need to be gradually introduced to the load, or otherwise they will stall, or quit.

During the engagement process, heat was being given off, due to the frictional interataction between the two discs. This is an important consideration, when matching up clutches, to the load/gearing system.

Clutches become very hot, if left to engage, or try to make a load move. If the load does not start to move after about 10 to 15 seconds, the clutch could heat up excessively, to the point where damage to the clutch will occur.

Typical damage is heat damage, where the clutch will begin to not grab as well, and also the internal components will become excessively worn, to the point where the clutch may fall apart or become inoperable.

There are several clutch systems that are use in go karting:

Centrifugal clutches are the most common, and the most cost effective clutches on the market. They are easy to mount, and are not hard on the budget (cost: $30-$40.)

The clutch operates by taking weights that are mounted on the engine shaft, and flinging them out to the hub/bell of the clutch driver. When the engine speed increases the centrifugal force on the weights increases by the square of the speed. (Force Wieghts = Konstant * RPM^2)

Some higher end clutches for racing will only engage at 2000 , 3000 or even higher, to maximize the grab of the clutch and the engine power. Typical engines have good power band at around 2000-3000 rpms.

A method that was popular in the early gokart racing days, was to direct the PVC vent tube to the clutch and chain. The purpose was to oil the chain, and cool the clutch. The side benefit of oiling the clutch is that it engages smoother, and at a higher rpm, maximizing the acceleration of the gokart.

There are two types shown, the sprocket version and the v-belt version. 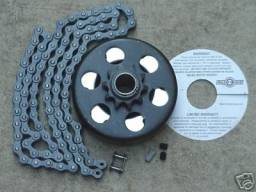 Variable Transmission clutches enable the engine to run at lower speeds, while allowing the gokart to reach higher speeds. The way the variable transmission clutch works is by using two variable pitch pulleys with a constant length belt. The ideal drive system for torque is to have a small pulley on the driver, and big pulley on the driven. This is great for torque. Upwards of 19:1 ratios can be achieved using this system. However, if you were to stay at 19:1 all the time, you would have a moving gocart, at say 3MPH but a screaming motor!!

The purpose, again, of the clutch system is to get the load going. So once the load is going, then you can try to get it to go faster and faster, until wind resistance, and friction match the horsepower being put out by the engine.

When the engine speed is suddenly dropped, the pulleys go back to their initial states, and the belt becomes disengaged from the driven pulley. 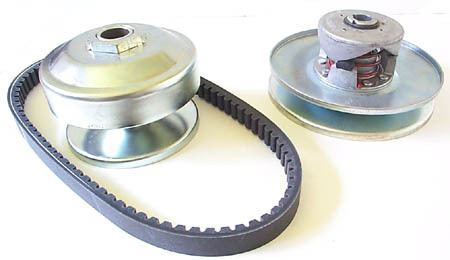 Belt clutches are the cheapest engagement system, though not the most efficient or desirable system to use on gokarts. Belt systems can get complicated, and ratios and horsepower are important considerations. If not matched properly, the engine could stall, belts could get burned up easily.

Belt clutches use the method of tightening the belt gradually to engage the clutch. There are two different methods:

(The assumption here is that the belt drive is not being turned on and off with a clutch. The low cost alternative is to have a limited slip belt-tensioner system.) The way it works is that the engine is allowed to spin freely while the belt is slack and does not grab. The belt is allowed to slip without damage to the belt in the driving pulley of the engine. 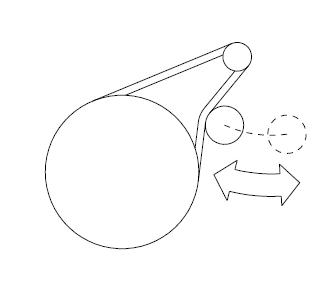 Figure 1 shows the belt being tensioned by the idler pulley or the belt tensioner. When the system is actuated the tensioner pushes on the belt to cause full tension on the belt.

Figure 2 shows the belt being tensioned by expanding the distance between the driver pulley and the driven pulley. The action is that the belt becomes tighter and therefore engages the system.

The expanding distance system is used more than any other system because of its simplicity. The twisted belt system can use this system provided that pulleys are shrouded to keep the belts from falling out of track.

Liquid clutches are durable and expensive. They are similar to the centrifugal clutch in that they operate on speed. They also typically are used with a one speed set up.

The way a Liquid Clutch works is that it has two turbine wheels contained in a sealed oil container. The engine turbine wheel wheel spins and causes the oil to spray out at the second paddle wheel. The second paddle wheel, which is connected to the drive sprocket, takes the energy from the moving oil and starts to spin until up to the same speed as the engine turbine.

Most gokart traks that run their gokarts all day use Liquid clutches. The oil inside the clutch absorbs the heat, and prevents damage to the clutch from occurring. Also, higher engine speeds, at idle can be achieved without any adverse effects.

Electric Clutches are simple and expensive. They also require a minimum of a constant 3 amp 12 volt electrical supply. A battery and a charging system would be required to operate such a system.

The way an a electric clutch works is that a stationary electromagnetic is positioned under a cast iron movable driven member. The clutch driver is a flexible plate that hovers above the cast iron disk. When the magnet is actuated the iron disc becomes magnetized and draws the driver towards it. As the driver is drawn to the iron disk, they slip acting as a clutch. Heat is given off in the engagement event. The clutch engagement force is related to the magnetic force imparted by the electromagnetic.

Typically, the magnetic clutches are used in air conditioning drivers for automobiles. The price typically ranges from $60-100.

The mounting for the clutch would be primarily mounted on the axel shaft.

The hydraulic system is by far the most versatile, complicated, and expensive system to use ($400+). The system gives the design greater packaging options, however, speed and performance are not as great as those of the more direct methods. Hydraulic losses, in particular, are the detriment of this type of system.

The system operates on the principle of building pressure. A pump is mounted on the engine, and hoses are routed to a hydraulic valve block. When the system is activated, or engaged, the hydraulic motor receives pressurized oil from the pump.

Engines can be stalled in this system, if not adequately matched to the pumps and motors.

The advantage of such a system is incorporating 4 wheel drive, or 4 wheel steer systems into the design. The elimination of chains, sprockets and belts is part of the advantage. It is not just as simple, however, as routing hoses, mounting a reservoir tank and some manifolds. Consulting a hydraulics house would be recommended prior to buying components.

To get the rear wheels to spin, or impart force into the pavement, a system or gearing, sprockets, or pulleys needs to be incorporated. Getting the engine to impart its magnificent power to the pavement requires a drive system. There are several systems they are:

The chain drive is basically a clutch mounted to the engine with a small sprocket mounted to the clutch. The chain is wrapped around the small gear and then is joined to the drive axel with a larger diameter sprocket (typically 72 to 90 tooth sprockets).

The ratio for the engine to the wheels is determined by counting the larger gear teeth and dividing it by the smaller gear teeth.

Be sure to try out the Power Programs.

The chain drive can have a clutch, transmission, or belt driving it. When a system has another system driving it, it is typically called a jackshaft system, or a secondary drive system.

The belt drive, is a system that incorporates belts to drive the system. Cogged belts, or V-belts can be used. The best torque transfer, however, with minimal strain on bearings is the cogged belt drive system. V-belts require tension to get the best result for torque transfer. If large amounts of torque are being transferred, multiple belts side by side may be required.

Variable speed transmissions basically take the engine and clutch it to a gear box, or a variable pitch pulley drive system. The output shaft is then directly mounted to the drive shaft, or a chain/belt reduced to the drive shaft. Most motorcycles have the engine and the gearbox incorporated into the same housing. The output is a sprocket that is then chain connected to the rear wheel. The clutch is included in this package.