The “Tin Lizzie Go-Kart” (also spelled as Lizzy) is a type of go kart that was developed during the 1950s. 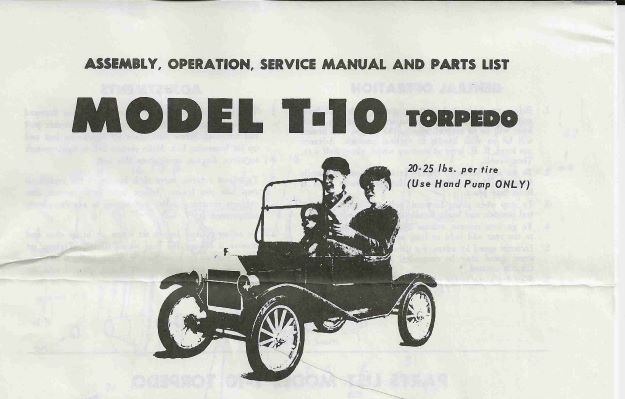 Dedicated owners ride them in parades (also known as promotional go karts) , such as the Shriners, and also many users have them as old go karts from their youth.  The company McDonough originally designed and built these go karts back in the fifties.  They were sold off to Crue Cut back in the early 70’s, but went out of business around 1973.

The go kart design consisted of a steel coupe body, bolted to a angle iron frame that was topped with a fiberglass fender system.  The grill consisted of a large sticker resembling the radiator from an old Model-T.

The drive system ranged from a vertical engine drives system to a horizontal motor system.  The Horizontal motor system consisted of a transverse mounted engine that ran a belt drive connected to a chain drive transmission.   The die cast aluminum transmission hinged on the rear axel and was rotated by actuating a lever mounted horizontally across the frame work.  The lever had a combination of brake and transmission mounted on the same axis.  The transmission lever was pushed down to tension the belt and then lock into drive.   The brake which was mounted to the same axis, was pushed down to activate some rubbing bars that would press against the rear tires or in some case the non-driven tire.

The rear axel is 7/8’s inch and is keyed only for the drivers side wheel (or left rear wheel) so that it is driven.  The opposite wheel (passenger side or right side) is designed to free wheel.

The bearings are bushing type and are typically oiled from cups mounted on the top of the bearing.  The bearing is not really a bearing but a bushing, that is contained in the frame work by a slotted bearing system. The hubs were retained by a cotter pin on both sides, whether driven or not.

The wheels on the original 1950’s go karts were made very similarly to the original Model T in that they have wood spokes that are contained by a metal rim.  Later models, arriving in around the late seventies were made of a glass filled nylon.  They are prone to break especially after they are around 15 years old.  Other models are available that have square spoked aluminum wheels that came out of Taiwan or China.  Of a side note, the plastic rims are more period correct, in that they have bumps on the rims resembling the tire holding brackets that were true to the original Model T cars.

The tire sizes for the wheels are 16 x 2.125 for the originals, however some users prefer the 16 x 2.5 versions as they are wider and work better for larger drivers. They also fill out the rim better and look a little more correct on the rim and go kart combination.  And finally, the 16 x 2.5 version are more readily available and lower cost.

The throttle for the motor was actuated very similarly to the original Model-T, in order to be more period correct or true to the original design.  The throttle was actuated under the steering wheel stalk with a lever that is pull down or up depending on the speed setting.  There is a second dumby lever that does nothing.  The throttle cable is a steel sheathed solid steel cable that is around 48 inches long.  There is no on-off switch, especially for the Tecumseh version, a spark shorted to the plug is pressed against the plug to make it stop.

The steering mechanism is a rack and pinion of sorts.  A small gear is drive against a half moon gear that is connected to the back side of the steering knuckles by connection rods with ball joints and clevis joints.

Ironically, some versions have solid front hubs with no bearings to hold the front wheel hub.  Some of the 1950’s versions, however, have roller bearings for the front hubs.

In all cases the front wheel is retained by a 3/8ths grade 5 bolt with fine thread that is tapped into the cast iron steering knuckle.  These bolts have been known to break, so they should be inspected periodically or even replaced, especially if the go kart is older.

The front steering assembly is mounted a casting that resembles the original Model T steering system.  It is mounted to a spring that fits to the frame work.

The light bar is made of a tube that is formed.  The ends are flattened to allow it to be bolted to the frame.  At the center is a hole for mounting the hardware.  The lights are cradled by curved flattened sections that bolt into the light cans.  The light cans themselves have the consistency of a tin can.  Some users are known to have taken old Tuna cans and substituting for lights.  The lights were just for show and do not light up, but have a polished surface to resemble light.  The can face has a burnished rim to resemble a lens.

On the very front is a hand crank that is simply a 1/4 inch diameter rod that is retained with washer that is welded on the face section, and retained in position by a locking ring style washer.

These Model T gokarts, because they are not made any more have parts that are hard to replace.  As a result the go karts in their original design are valuable as collector items, however parts are hard to come by, parts like steering gear, steering wheels, rear hubs, front hubs, fenders, seats, lights, light bars, wind shields.  The list goes on.

We here at the GoKartGuru.com have several major components and know how on Model-T, Tin Lizzie or Model T Promo Karts.  We are dedicated to keeping the go kart replacement parts as original as possible.