On gasoline engines the primary method for causing the fuel air mixture to become ignited is to use a spark. The spark is generated using high-voltage electricity which jumps across a gap in the engine combustion chamber. We all understand this process that the spark plug must give spark and therefore the engine will run properly, however we don’t generally understand how the spark is generated and what the mechanism is that causes this whole event to occur.

In this particular discussion we will talk about magnetos and solid state ignition systems, additionally we will talk about old-fashioned car coil systems because often times larger two cylinder engines will use a coil which operates off the battery.

Understanding ignition systems is that you are trying to manage high-voltage electricity. As we all well know when you put your hand on a high-voltage fence  (such as an electric fence to hold cows in the pasture) is a very large hair-raising experience which is very unpleasant.

The best way to manage the high-voltage electricity is though magnetic fields because magnetic fields don’t have mechanical parts to them.  They are, if you will, unseen forces that can hold caustic and dangerous environments at bay.

The same concept is being employed when managing high-voltage electricity but out of smaller, more cost-effective and downsized package.  The magnetic field is being used to  work with high-voltage spark plug of electricity.

To analyze the ignition system for a small engine we are going to start with the earliest design which was the magneto points system. 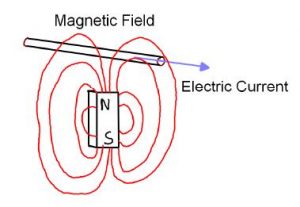 The concept is that when a magnetic field is passed by a wire it generates electricity.

A similar concept is used in generating magnetic fields. When a coil of wire is wrapped around an iron core and electricity is introduced into the wire a magnetic field is generated. 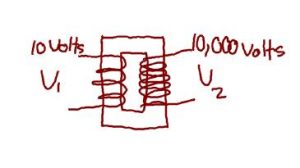 Transformer Takes Input A/C Electricity and Converts it to a Higher Voltage, but lower current

So a magneto is a glorified transformer that is turned on and off at certain times so that high-voltage electricity can be shoved through the spark plug. The turning on and off of the transformer is accomplished by the points. 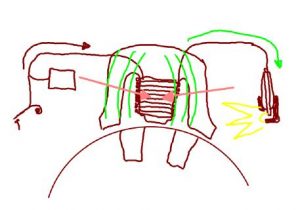 The points on the left close, causing the field to collaspe (pink arrows). The collasping field generates a spike which transfers into the spark plug coil. Spark plug on the right.

There certain parts of the magneto system that are designed to absorb electricity so that they are not worn out during the whole process of switching. The device that were talking about is called a capacitor. The capacitor takes the electricity that would like to jump across the points gap and absorbs it or cushions it in the condenser or capacitor.

A capacitor is kind of like a spring. It absorbs the energy of the electricity and prevents it from actually jumping across the point gap. The reason for this is that the points will become pitted and soon become dysfunctional or non-operational if the condenser or capacitor is not in the circuit or working properly. 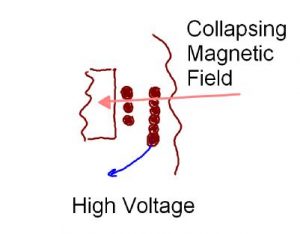 On a car a coil is used to act as a high-voltage switching device. Up till about the late 80s and early 90s coils were used extensively to supply high-voltage current to distributor caps even though points were not being used in the system. The switching was accomplished using solid-state circuitry, however that basic concept of switching a coil “on” and “off” was still maintained.

The first wire has 12 V of electricity that is induced into the circuit. When the electricity is turned off to the coil a magnetic field correspondingly collapses back into the first coil wire system. This collapsing magnetic field passes through the second set of windings causing a large high-voltage electrical current to pass through it. This high-voltage electrical current is used to cause a spark in the spark plug.

The means to cause the coil to turn on or off  a points system or a solid-state circuitry device is used. 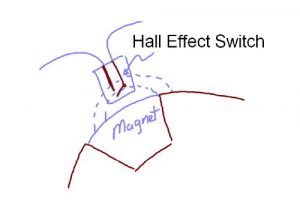 When the magentic field passes by the Hall effect switch, it automatically turns off the switch.

On a car the same principle is used to generate high voltage sparks. The solid-state switching is accomplished using computers and Hall effect sensors mounted on the engine block close to the main belt drive system.

The nice thing about solid-state systems is that their compact and they don’t require mechanical linkages such as fly wheel weights, vacuum lines and other complications.

The question comes in when you’re troubleshooting these electronic systems how do you know what the problems are?

Well the troubles occur in the following three areas regardless of whether or not it is a solid-state ignition system or not:

The ignition coil is the device that switches magnetically to high-voltage using an on off the circuit. The switching device is what turns on and off the coil. The coil must first be excited or full of electricity before it can be collapsed. So an electrical current is required to be generated first in to the coil.

The first thing to examine is whether or not there’s a magnet in the flywheel. In other words is a magnet dead or not? To test this put a screwdriver or a piece of metal on the flywheel magnet and if it holds it in place then the magnet is fully charged.

The second thing to examine is whether or not the points system is working properly or not. This requires inspection of the points system. If the points are painted they need to be scraped and cleaned. This will keep at bay the problem of nonfunctioning ignition system, however it is indicative of a points system that needs to be replaced and most especially a capacitor that is faulty.

On a larger engine that uses a coil system the general principles basically simple.  An electrical current is being generated by inducing a voltage through the secondary circuit. When this secondary circuit is turned off the magnetic field collapses through the primary wire and causes a high-voltage to come off the center of the coil. So if the system is not working it typically is not the coil’s fault, it typically is the switching device that is at fault.

Care must be taken to make sure that the solid-state ignition system which is turning the  coil on off has the correct wire coming off of it.  All that is required for this system is electricity is turned on to the solid-state ignition module and electricity then flows from the module to the coil. The module acts as a switch turning on off. The way the module turns on and off users typically a magnetic field off of the engine flywheel.

From a packaging standpoint the coil switch is a simple device bolted near the flywheel magnet interface.

Bottom line is that an ignition system is trying to manage high-voltage by switching using low-voltage. The complication comes when you’re trying to turn on and off the low-voltage circuitry. This can be accomplished using a mechanism such as points, or a Hall effect sensor such as a magneto uses, or a computer as is used in a car.