Vertical Engine Using a Worm Gear Drive On A Go Cart: What Is The Prognosis? 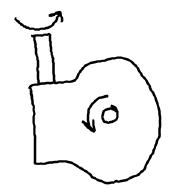 Basic Worm Gear Box from the side

Worm gear drives seem to be the simple solution to the vertical engine problem: a simple driver attached to a worm gear box and a 90° orientation coming of the gearbox and all you have to do is hook up the output shaft to a go kart.

The initial analysis or proposal appears to be very sound, however until you dive in and take a look at the gearbox itself do you realize the issues involved with worm gear drives.

For those not familiar with the worm gear drive let’s break it down. A worm gear drive basically is like a screw that turns on top of a gear on its side. The turning screw moves steadily along and the gear follows the worm profile. 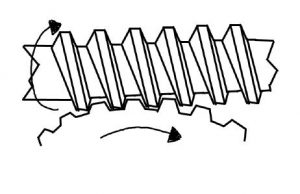 Their are various problems associated with worm gear drives:

First of all they are 20% inefficient compared to a planetary gear system. What I mean by 20% inefficient is that friction losses are encountered in the interface between the worm and the main drive gear which are pretty high.

And thirdly the gear ratio required for a go kart is typically substantially different or lower than what a worm to your box delivers. For example he worm gearbox typically will dish out a 20 to 1 ratio whereas a go kart only requires a 10 to 1 ratio.

The fourth problem with a new worm gearbox is the fact that you’re using a screw and it cannot be cross driven easily. What I mean by cross driven is back driven. This can become a problem if the clutch is attached to the input side or screw/worm input of the gearbox. If the go kart needs to coast and the engine is let off the gas you’ll get a sudden jerkingness or hesitance in the drivetrain. This will be the most severe problem encountered with a worm gear drive.

Very often on go carts the best way to slow down the go kart is to use the engine as it is revving down. With the worm gear drive box, because it cannot be back driven you will get a hesitance or a shocky or locked up rear end problem. And this is no light problem either. This can be a very severe out of control problem especially if you’re using it for go carts.

To get a better understanding what a back driving system is doing is, it is trying to force a worm to turn more. In fact you are slamming a gear face against a flat plate and trying to sheer off the worm/screw thread.

The fifth problem is related to the first problem, in that the component sizes must be catered, or designed so that they can transfer heat and stress without wrecking themselves. The main problem that a worm gear drive encounters is viscosity breakdown or high contact worm/gear stress. The main function of oil in a gearbox is to provide a barrier between the metal contacting surfaces and to carry away the heat that is generated during the pressure of event that occurs when two surfaces approach each other with higher force and speed. 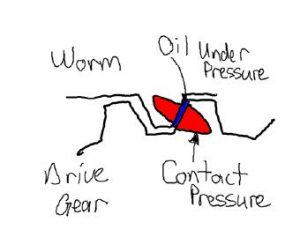 Worm gear contact pressure and oil interface. The oil gets squeezed out at the pressure of the worm gets higher. Shock loads from impacts (such as engine firings) can make the oil film interface brake down. This is also a sliding motion, so the oil is being peeled off the face of the main gear and must be replenished immediatly.

We call this contact pressure, or contact force or even contact points. Worm gear drives require special attention in the worm contact and gear interface points. Additionally adequate oil penetration is required to keep the worm and the gear from actually touching each other. When they do touch each other then you have failure and metal grinding on metal. It is just a matter of time before the worm eats away the face of the gear and the gearbox is rendered useless.
\The speed of the worm is limited to how fast it can go before viscosity breakdown occurs and the oil actually is not helping. As a result the worm gear drive really is not a good fit for engine applications typically.

Typically worm gear drives that are available on the market are designed for fractional horsepower and not for multiple horsepower such as 5 to 10 hp. The reason for this is multiple. First there is not a great demand for gearboxes that require more than half of horsepower, such as a conveyor belt. Secondly the gearbox has the back drive problem which makes it less able to take shock loads such back driving system.

So in short even though it seemed like a good idea to use a worm gear drive on a go kart it is not actually that great an idea after all because of the following issues: