What Do The Eiffel Tower and Camber Have In Common?

The Eiffel Tower back in the later 1880s was a technological achievement in its day. Standing over 1000 feet tall.  It was made of cast iron plates and bolted together. The Eiffel Tower was supposed to be erected and stay in place for a world’s fair and then taken down afterwards but the French people loved it so that it stayed in place. You may be wondering what does the Eiffel Tower have to do with a go cart?

Like a related story about go cart design, camber is related to how the Eiffel Tower stands.

Have you ever wondered why a motor cycle angles on a corner, why a gazelle angles at extreme angles to get away from devouring cheetah at over 60 mph? What is it with the extreme angle when animals, people, motorcycles go around corners? 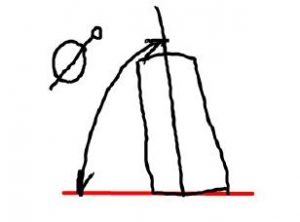 The answer to this question is related to camber. Camber by definition on a go cart or a car is where the angle of the wheels is angled not perpendicular but at an angle inward and towards the vehicle. Imagine you’re drawing a centerline straight up out of the center of the two rear tires. Then imagine taking the tires and angling them so that their lines intersect in the sky and resembled an “A” structure.

Now imagine you are standing on your two feet and you have both feet close together. Someone comes along and pushes you. In order for you not to fall over you put your foot out and spread your legs apart and “A” stance.  An “A” stance is more stable than a straight up-and-down stance. More scientifically the forces are directed more in a straight line them at an angle to the tire. 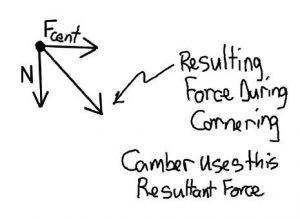 Tires have a complex job in that they are trying to do multiple jobs at one time.

They are trying to accelerate the vehicle, slow the vehicle, corner  the vehicle. Camber is designed especially for cornering. Tires have a difficult job of holding form around the corner. When a go kart or a car for that matter encounters a corner the tire tends to scrub under or bend.  The bending of the tire in the corner or the deformation of the tire during cornering is known as tire scrub.

All tires will deform during cornering it is just a matter of how much deformation is acceptable for the particular application. Camber helps minimize the effects of tire scrub and maximize the cornering forces through the tire into the frame work of the vehicle. 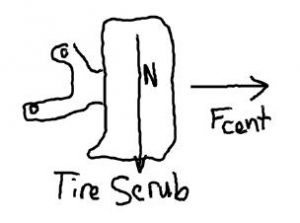 Tire Scrubbing (or Bending under) Also No Camber Angle

The reason why a person, a motorcycle, a cheetah, or a gazelle angles themselves during cornering is because the forces are translated more directly into the ground as the following diagram demonstrates.

Camber is a means of increasing cornering performance but it has a downside in that it increases tire wear. The balance of tire hardness, sidewall stiffness, tread depth and material compound are factors that affect tire wear. They also dictate how much camber is acceptable. It is ideal to have camber introduced during the cornering event and then removed when the vehicles driving in a straight line.

Typically the wear on the tire will be on the inside and so the tires need to be rotated around periodically to even out the wear. Eventually the tire itself will become concave and will have to be replaced. On a go cart with a straight axle the effects of camber are not going to be possible to introduce into the rear section, however the front wheels can have camber introduced into them along with other steering effects. The steering effects being the Ackerman relationship and Castor. 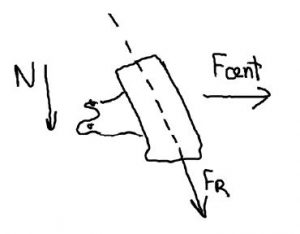 Camber and The Resultant Force Acting Through The Camber

If you are seeking to gain more cornering performance on your go cart introducing camber into the front steering system is an acceptable method towards higher cornering performance. Understand however, the trade-offs are tire wear and surface contact. If front brakes are used on a go cart with extreme camber on the front wheels then the effects of braking may be affected because the contact patch will be at the side wall or at half of the tire versus the whole tire width. The loading forces are different during braking then they are during cornering is my point. So if you are developing a vehicle understand these variables.

The Eiffel Tower was a revolutionary design in that it was a very stable structure. The angle of incidence for the upper right’s starting from the ground up to the Tower gave the Tower the stability it needed because the forces were directed more into the members versus straight up-and-down.

Next time we’ll talk about caster and how caster helps steering systems and the effects that it has on steering dynamics.